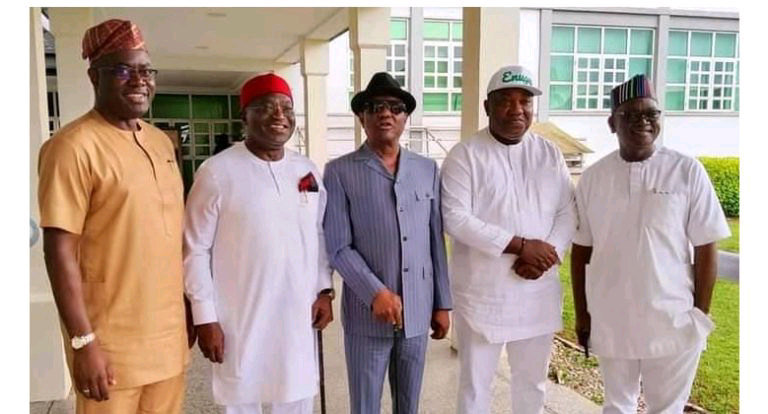 The five aggrieved People’s Democratic Party governors have demanded the support of the All Progressives Congress presidential candidate, Bola Tinubu, for the PDP governorship and senatorial candidates in their respective states, The PUNCH has learnt.

It was gathered on Thursday that this was part of the conditions presented to Tinubu during his meeting with the PDP governors in London, United Kingdom, on Tuesday.

The governors alongside Donald Duke, Jonah Jang, Olusegun Mimiko, former governors of Cross River, Ondo and Plateau states, respectively, as well as a Board of Trustees member, Chief Bode George, are defiant in their call for the removal of Iyorchia Ayu as the national chairman of the party.

A reliable source disclosed that the five governors were concerned about their political careers and sought assurances from Tinubu.

Though Wike is not contesting for any position in the 2023 elections, he was said to be concerned about his protégé, Siminalayi Fubara, who is the Rivers State PDP governorship candidate and the PDP senatorial candidates in the state.

On the other hand, Makinde is running for a second term while Ortom will be contesting as the Benue North-West Senatorial District candidate in the polls.

However, there are different accounts of the final decisions of both the governors and Tinubu on the demand.

A source close to Tinubu told The PUNCH that a final agreement could not be reached as a result of the ‘complex demands’ by the governors.

According to him, the PDP governors made an overture to Tinubu to guarantee both the senatorial and governorship seats in their states, a demand the former Lagos State governor could not grant immediately as he needed to consult with his advisers and loyalists.

The APC chieftain confided in our correspondent that Tinubu may not be willing to concede to the demand with less than two months to the 2023 elections.

He said, “The G-5 governors do not hold the four aces. As it stands, they are actually seeking shelter. The major hitch we have is that all the members of the G-5 demanded for the governorship and senatorial seats in exchange for the big prize.

“Now, the question is, how are going to throw our people in Rivers, Plateau and Benue under the bus? I am worried about Benue, where we have low-hanging fruits. Of course, it is obvious we are set to win Benue with Reverend Father Hyacinth Alia, who we are sure will sweep the governorship poll.

“There is also the APC governorship candidate (Teslim) Folarin who is prominent in Oyo. These are complex situations we are still grappling with and I can tell you that is where we are. The PDP governors are astute people who are very good in politics.’’

The source also noted that there were increasing pressures on the APC presidential candidate to call the bluff of the Integrity Group by not conceding any positions to them.

Except for Rivers, the party chieftain said it had been projected that Benue and Oyo would fall because of the volume of mobilisation campaigns that had been carried out in the two states.

“Whether Makinde likes it or not, Oyo will fall. Abia has never been our ground. We also lost in Enugu and Benue in 2019 where we failed to get 25 per cent. Yet, we still won the presidency.

“I can tell you without Ortom, we have a very good chance of winning Benue in 2023 with Reverend Father Hyacinth Alia. But we know Rivers State is where we are very vulnerable and may need Wike to push up. These are the five states that we lost yet won the presidential election in 2019.

“The truth, however, remains that Asiwaju knows that these five states are not the tipping points to win. It is just to make his victory double sure that we have to pitch tent with them. But as I told you, they are not in a position to stamp their feet, draw the line and impose conditions on Asiwaju. Their support is inevitable because these governors really have nowhere else to go,” he said confidently.

On whether there is a chance Tinubu might meet the group again in January before they announce their preferred candidate, the politician disclosed that the negotiation had not ended.

He stated, “The PDP has turned to a caricature that people now laugh at. We always knew the PDP implosion will come even before the primaries. We were waiting for it to happen.

“Even when the ruling party was dilly-dallying on the issue, the governors took the bull by the horn and zoned it to save the APC from this kind of implosion the PDP is having. This is what they should have done. They actually met and agreed the presidency should come to the South in Asaba but (Delta State governor, Ifeanyi) Okowa stabbed them in the back.’’

Meanwhile, there are indications that the aggrieved PDP governors would arrive in Port Harcourt, the Rivers State capital on Friday (today) after their meeting with Tinubu in the UK.

The PUNCH gathered that they equally met with a former Deputy President of the Senate, Ike Ekweremadu, who has been in detention in London for alleged involvement in an attempted organ harvesting since June.

A close aide of one of the governors dismissed the threat by the PDP leadership to sanction the governors, saying they did nothing wrong to warrant the invocation of relevant provisions of the party constitution on the discipline of members.

The source, who spoke on condition of anonymity stated, “They will brief the press tomorrow (today) as soon as they arrive in Port Harcourt. They may speak on their preferred candidate of course but their stand is that the party cannot sanction them because they have not done anything wrong.

“As it is, they believe they are championing a cause backed by the PDP constitution in matters of fairness and equity. So, their argument is that they are on track in demanding that after eight years of Presidency in the North; the South should be supported to have a shot at it.’’

In his reaction, the National Publicity Secretary of the party, Debo Ologunagba told The PUNCH that the PDP would not address the issue until the governors speak on their preferred candidate, saying, “Ours is a party of order and rules. Until we get to the bridge, we won’t cross it.”

On his part, the immediate past National Secretary of the party and member of NEC, Ibrahim Tsauri said the leadership of the party would act at the appropriate time.

Emotions High As Rapper Eedris Abdulkareem Says ‘My Wife’s Donation Of Kidney Shocked Me’, Releases Album To Appreciate Her

Emotions High As Rapper Eedris Abdulkareem Says ‘My Wife’s Donation Of Kidney Shocked Me’, Releases Album To Appreciate Her

Confusion Over Makinde’s Stand In Atiku; He Insists On Inclusiveness To Support PDP Tourchbearer Whereas Party Chieftain Says ‘Makinde Can’t Work Against Atiku’

2023: Popular Singer Nice Declares For Tinubu Says ‘I’m Supporting Tinubu For President Because He Asked For My Phone Number’ (VIDEO)