Skip to content
You are here
Home > Blog > 25 Presidential Aspirants Including Tinubu, Osinbajo, Adesina To Slug It Out For APC Ticket 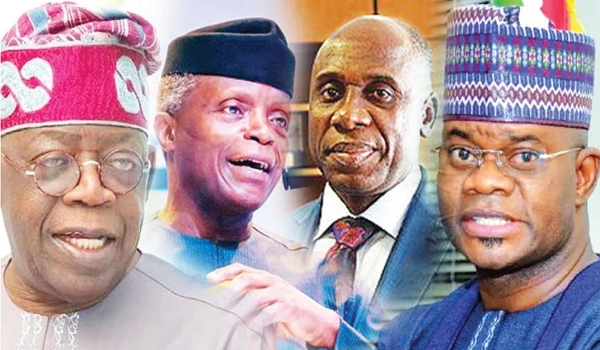 Twenty-five of the 29 presidential aspirants that purchased the All Progressives Congress, (APC) expression of interest and nomination forms are now in the frame to face the party’s screening panel later today having submitted their completed forms at press time last night.

The screening will last two days ahead of the primary slated for May 28.

But the same could not be said of former President Goodluck Jonathan and Central Bank of Nigeria (CBN) Governor Godwin Emefiele both of whom did not turn in the forms bought for them by “friends and well-wishers.”

A source at the APC national secretariat said the two men “have up till midnight to submit their forms. But as at 9 pm, we have not seen them or their agents.”

Simultaneously, a group approached a Federal High Court, Abuja praying it to bar the former president from participating as a candidate in the next presidential election, while a Delta State High Court, Kwale, restrained the board of the CBN and the Independent National Electoral Commission  (INEC) from stopping Emefile from seeking an elective post.

DECENCY GLOBAL NEWS gathered that the legal directorate of the party on Thursday began the vetting of documents submitted by all aspirants with a view to determining the authenticity of the papers.

A source in the department said the party leadership learnt a big lesson from the last minute disqualification of the party’s governorship candidate and his deputy in Bayelsa State due to some lapses in the documentation of the then deputy governor-elect.

“We are going through all the papers filed by all the aspirants in order to avoid any avoidable mistakes. Anyone with past criminal records or convictions will not be allowed to contest. We want to mitigate any post-election litigation that can upturn our victory,” the source said.

Court urged to bar Jonathan from contesting next presidential election

A group, the Rights for All International, (RAI), has approached the Federal High Court in Abuja to bar ex-President Goodluck Jonathan from participating as a candidate in the next presidential election.

Plaintiff also wants the court to restrain the APC from fielding Jonathan as its candidate and to bar the Independent National Electoral Commission, (INEC) from accepting him as the candidate of the APC for the election.

Suit FHC/ABJ/CS: 662/2022 was filed yesterday by the incorporated trustees of the RAI through their lawyer, Okere Nnamdi.

Listed as defendants alongside Jonathan are APC and INEC.

The plaintiff is contending that having taken the oath of office of the President for two times, Jonathan was no longer qualified, under the constitution, to stand for election as president.

RAI stated in a supporting affidavit that the 1st defendant (Jonathan) has been twice elected to the office of the President and held the office on two previous occasions.

“The Constitution of Nigeria provides for both qualification and disqualification to contest the office of the president of the Federal Republic of Nigeria.

“The 1st defendant has fulfilled constitutional provisions, having been elected and sworn into the office of the President of the Federal Republic of Nigeria on two previous elections as envisaged in section 137 (1) (b) of the Constitution.

“The 1st defendant is constitutionally not qualified to contest any presidential election in Nigeria, having been elected, sworn in and held the office of the President of the Federal Republic of Nigeria on two previous occasions.”

The plaintiff wants the court to declare that having regard to the clear, unambiguous and express provisions, spirit and tenor of the Constitution of the Federal Republic of Nigeria 1999 (Fourth Alteration Act no 16), which provided a new subsection (3) to section 137 of the Constitution, the 1st defendant is not qualified to contest any presidential election in Nigeria.

It wants an order perpetually restraining, prohibiting and barring the 2nd defendant (the APC) from nominating Jonathan as its presidential candidate for the 2023 Presidential election on the grounds that the 1st defendant is constitutionally not qualified to contest any presidential election in Nigeria, having been elected, sworn in and held the office of the President of the Federal Republic of Nigeria on two previous occasions.

The plaintiff equally wants the court to issue an order perpetually restraining, prohibiting and barring the 3rd defendant (INEC) from accepting the nomination of the 1st defendant as the presidential candidate of the 2nd defendant for the 2023 presidential election on the ground that Jonathan is constitutionally not qualified to contest any presidential election in Nigeria, having been elected, sworn-in and held the office of the President of the Federal Republic of Nigeria on two previous occasions.

The National Publicity Secretary of the People’s Democratic Party

(PDP), Mr. Debo Ologunagba, said Friday that Dr. Jonathan has not resigned his membership of the party contrary to speculations that he had switched camps to the APC.

Ologunagba, speaking on Channels Television, said as at Friday, he was “not aware of his (Jonathan’s) resignation from the membership of the party (PDP).”

”I would assume it is safe to say that he is a member of the party. If events follow thereafter, we can speak to that.”

He maintained that the PDP would not respond to rumours about Jonathan’s defection as there were no facts to substantiate any such claim.

Emefiele steps back from presidential contest

Central Bank (CBN) Governor Godwin Emefiele remained at his desk at the Abuja headquarters of the apex bank last night with no official word from him on his perceived presidential ambition.

Although sources close to his office said a statement would be issued to categorically state Emefiele’s position on the presidential race, there was no such statement at press time.

A CBN source said the governor was “on his seat in his office attending to official matters”.

The source said CBN officials were busy making arrangements for the Monetary Policy Committee (MPC) scheduled for next week.

Emefiele, during a visit to President Buhari on Thursday, told reporters to ‘expect news’. He said he was having fun with speculations about his presidential ambition.

Court restrains CBN Board, INEC from stopping his political aspiration

A Delta State High Court sitting in Kwale division has granted an order restraining the Board of Central Bank of Nigeria and Independent National Electoral Commission from preventing the CBN governor, Godwin Emiefele from seeking an elective post.

Emefiele had through his counsel, C.N Ofiah esq, filed an ex-parte motion to obtain an order to enable him remain in office while contesting for the Presidency.

DECENCY GLOBAL NEWS gathered that the application was filed on May 5, 2022, and his prayer was granted on Thursday, May 12.

Justice DC Maidoh said: “I have read the processes in this suit. The applicant has complied with Order 39 of our rules. Applicant also deposed to an affidavit of urgency.

“From the processes before the court, I find that the said application at this stage has merit pending the hearing and determination of the Motion on Notice.

“In the circumstances, in line with order 39 rule 3 of our rules, this motion is hereby granted. The motion on notice is accordingly adjourned to 25/5/2022 for hearing.”

“God Will Punish You For Killing Osifo, You Want To Spoil Business For Us” – Bobrisky Slams Chidinma

Anambra Guber 2021: IPOB Vows “There Will Be No Election In Anambra State”